As a partner organization of the RAIZVANGUARDA Cultural Association based in in Gois (Portugal), the Art and Cultural Studies Laboratory (ACSL) collaboratively organized series of workshops entitled ‘Performance Art as a Tool for Democracy’ led by denisas Kolomyckis, co-workers Luis Carvahlo and Inesse and a performance ‘The Picture of Dorian Gray’ by an artist Denisas Kolomyckis on a stage of the Small Theater (Poqr Tatron) of the National Center of Aesthetics (NCA), Armenia.

The aim of the workshops is to establish a working and collaborative platform with artistic and non-artistic communities with introducing them the idea of Performance Art, and promoting their own power for an active society. During the workshops, participants will have the opportunity to create their own interpretations, producing new ideas that will be tested during the workshops. Other artistic disciplines were introduced, being taken as a starting point for a critical thinking and artistic improvisation. The objective is to demonstrate the possibility of achieving social change through the use of artistic tools.
The series of workshops embraced the students of the Art College (NCA), artists of the Small Theater and group of MA students of the Institute of of theater and Cinematography/department of Scenography and theater directing. The RAIZVANGUARDA and ACSL will continue that reciprocal collaboration in Portugal in a frame of new body of projects which are in the stage of processing and developing and will take place in 2015.

Workshops 1: Performance Art as a Tool for Democracy
The aim of this workshop is to introduce participants to the Performance Art, promoting their own power for an active society. During this workshop, participants will have the opportunity to create their own interpretations, producing new ideas that will e tested during the workshop. Other artistic disciplines will be introduced, being taken as a starting point for a critical thinking and artist improvisation. The objective is to demonstrate the possibility of achieving social change through the use of artistic tools.
Duration: 8 hours (09h30-13h00/14h18h30)

Workshops 2: Body – The Link between Art and Society
This workshop has the objective to show the participants the importance of their body by demonstrating the capabilities of motion and composition skills as well as the development of critical thinking, combined with the creativity of expression. Through this workshop, participants will have the opportunity to create their own choreography and perform it.

‘The Portrait of Dorian Gray’ is a multidisciplinary synthesis of the work of Oscar Wilde, that incorporates elements of theatre, contemporary dance, music, sound and visual arts. The novel was adapted for an actor/ dancer who will recreate all the characters through voice, body, movement and music. The performance will include numerous multicultural expressions: traditional dances, language, music, sounds and video, which reflect human creativity and are measured in many fields of cultural heritage. It will be focused in Portuguese, Lithuanian and Armenian culture. Festivities, rituals, oral traditions, weddings, funerals and multicultural festivities will be addressed from the work. Contemporary dance plays a crucial role in performance. Through body, ordered and highly complex movements will illustrate specific events of the novel. Dance is a language for the spectators, and through natural movements, homoeroticism, narcissism, seduction, beauty and gratification the novel will be present. The performance addresses issues such as multiculturalism, art as a tool for democracy, LGBT rights and human rights. All performances in Armenia will be recorded and documented. They will be posted online for the general public.

Denisas Kolomyckis is an interdisciplinary, performance artist, dancer and director.
Worked with Lithuanian director Sarunas Bartas and avant-garde filmmaker Jonas Mekas in New York.
He has presented his works in USA, Russia and many other European countries.
Denisas is an activist for human and LGBT rights and he has been awarded with the prize for the Youngest Lithuanian
Volunteer in 2006. In 2013, Denisas Kolomyckis spoke on the international platform TEDx about “Performance Art as a
Tool for Critical Approach”.

Luís Carvalho graduated in Sound and Image by Escola Superior de Arte das Caldas da Rainha, where he studied Cinema and Photography. In 2012/2013, Luís Carvalho participated in a European volunteer program in South Caucasus, having lived in Gyumri. In Armenia, he worked in youth initiatives, organized art events and within the non–‐formal education, studied the Armenian language and culture.

The project is funded by Galouste Gulbenkian Foundation with support and partnership of ACSL, Lithuanian Embassy in Armenia, Youth Initiative Centers in Gois and Yerevan and others. 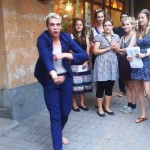