According to the artistic duo Mischa Badasyan and Vardan Harutyunayn, ‘the public performance ‘Blow-Blew-Blown’ is about relationship and communication that have been forming the general human being.’ The public performance examines issues of dispossession vs domination, violence and tenderness, freedom and suppression, etc. However, the artistic duo does not pursue an aim of re-affirming the traditional binary oppositions. The performative action of the artists rather represents sacrifices and an exhaustive path of seeking than affirmation and self-righteousness.

Mischa Badasyan is a performance and video artist based in Berlin, Germany. He was born on February 25th, 1988 in Rostov on Don, Russia. His father is a Georgian-born Armenian and his mother is Armenian. Badasyan studied Political Science at the South University in Rostov and actively engaged in environmental protecting organizations, Human rights, and LGBT communal work. In 2008, he moved to Germany and eventually began studying social work in Dresden, while staying active in social/AIDS/LGBT organizations. It was later, in 2011, when Mischa Badasyan merged in the stage of live performances: ‘I moved to live in UK and visited the Manchester’s International Festival, and amazing and shocking part of it was a live performance by M. Abramovich. That was a crucial momentum in my professional career and I deeper merged in that stream that we know as ‘performance art.’

Vardan Harutyunyan is a composer and sound artist with particular interest in making filed recordings. Vardan has been often the often invited to collaborate with visual artists. Vardan Harutyunyan was born in Yerevan in 1987. He has graduated the Yerevan State Conservatory (composition class) and has been working in the fields of academic, electronic, and electro-acoustic music. 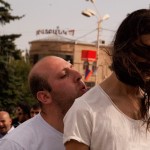